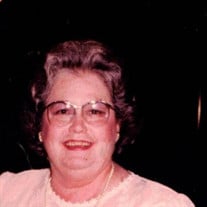 Aleta Reibell passed away Monday, August 9, 2021, in Pulaski, TN. She was born in Memphis, TN on February 17, 1928 and was 93 years old. She was loving mother, and grandmother. She loved crocheting, knitting, and doing all kinds of crafts. A... View Obituary & Service Information

The family of Aleta Reibell created this Life Tributes page to make it easy to share your memories.