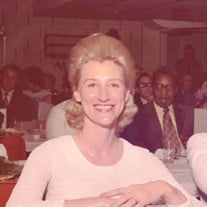 Betty Anne Potts Gerlach pasted away on September 8th2021 at her home. She is the daughter of Mr. and Mrs. William L. Potts Sr. of Prospect. She attended Prospect School and Martin College. She is preceded in death by her Parents, Bothers: John Andrew Potts, W.L. Potts Jr. and James Douglas Potts. Stepson: Allan J. Gerlach and Nephew Alen Potts. She is survived by her Husband of 35 years James A. Gerlach and Grand Daughter Sara Grace Gerlach, her parents Phyllis and Bob Owens and her brother Sam. And Nephew David Potts (Sheila) of Terrell, Texas. Betty was a Banker she began her career at First National Bank of Pulaski where she served as Sr. Vice President & Director of Marketing. She attended (ABA) School of Bank & Marketing at Northwestern University in Chicago, IL. She also served as the Director of Bank Marketing Association (BMA) for 3 years. She was active in many roles for Tennessee Bankers Association and Giles County Chamber of Commerce, and other civic organizations. In 1984 She married Jim Gerlach and moved to East Tennessee as AVP Marketing for First American Bank in Chattanooga and Cleveland, Tennessee. She was a member of the Bradley County Chamber of Commerce Diplomatic Committee and Chattanooga Symphony Guild. After her time in East Tennessee, she moved to Dickson to become Vice President of Marketing for Peoples Bank and later as City President of U.S Bank until her retirement. She chaired the first Ambassador Committee for Dickson County Chamber of Commerce. She was a Rotarian and served as President of the High Noon Rotary Club and later served as Secretary Director of the Tennessee Rotary District 6760 and The Clement Foundation. Music was an important part of her life. Betty's love of music began at an early age with her family. She learned to play the piano at the age of six and continued her love of piano for her entire life. She played for many groups from church pianist and church functions to business meetings and other group outings. Whether it was Southern Gospel to Country to Classical she appreciated all forms of music. Music was spiritual for her as well as healing to her heart and soul. Music is powerful and Betty cherished all facets of it. After her retirement they moved back to Pulaski. Jim and Betty traveled extensively spending summers in Northern Minnesota and winters in Biloxi, Mississippi and many points in between and the remainder of their time in Pulaski. A private family memorial service is planned for September 18, 2021. In leu of flowers Donations can be made to The Giles County Help Center. Bennett-May & Pierce Funeral Home in charge of Arrangements for Betty Anne Potts Gerlach.

Betty Anne Potts Gerlach pasted away on September 8th2021 at her home. She is the daughter of Mr. and Mrs. William L. Potts Sr. of Prospect. She attended Prospect School and Martin College. She is preceded in death by her Parents, Bothers: John... View Obituary & Service Information

The family of Betty Anne Potts Gerlach created this Life Tributes page to make it easy to share your memories.

Betty Anne Potts Gerlach pasted away on September 8th2021 at...