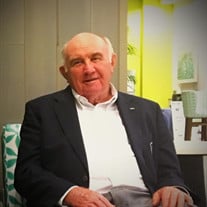 Billie Wayne Slayton, age 79, passed away at his home in Elkton, Tennessee, peacefully on Tuesday, October 6th, 2020. He was born in Elkton on September 2, 1941. Mr. Slayton was a farmer, business owner and retired from the United States Air Force. Mr. Slayton left Elkton at 18 years old to join the USAF and his career took him all over the world. While in the USAF he served in Vietnam where he was decorated with a Silver Star and a Bronze Star, with a device for Valor. He was a member of the USAF Combat Control Team and had the distinguished honor of being inducted into the CCT Hall of Fame. He was the owner of S&V Manufacturing in Prospect and a plant manager at Stanley Tools. He received his Bachelor’s Degree from Park College and his Master’s Degree from Webster University. He was a loving husband, father, and grandfather. He loved to farm and watch his children and grandchildren ride horses and was an avid Tennessee Vols football fan. He was preceded in death by his father, Deputy Sherriff Hub Slayton and his mother, Sue Slayton. He is survived by his wife of 57 years, Valerie Slayton. His loving family, daughter Sandy Slayton-Mavrotheris and husband Micah, sons Jeffery Slayton and wife Melanie, and Greg Slayton and wife Jenny all of Elkton, Tennessee. Four grandchildren, Sarah Slayton of Centerville, Tennessee, Hub Slayton of Huntsville, Alabama, Joshua Slayton of Spring Hill, Tennessee, and Nick Mavrotheris of Elkton, Tennessee. One step-granddaughter, Crysta Nilsson, of Memphis Tennessee. Sister, Angeline Mathis and husband Jere of Fayetteville, Georgia and sister Debi Erwin of Georgia. Many nieces, nephews and dear cousins also survive. Visitation will be held at Bennett May & Pierce Funeral Home in Pulaski, Tennessee. Visitation will be on Thursday, October 8th from 11:00am -2:00pm and service will be held at 2:00 pm at the funeral home. Burial with full military honors will be held following the funeral at Elkton Cemetery.

Billie Wayne Slayton, age 79, passed away at his home in Elkton, Tennessee, peacefully on Tuesday, October 6th, 2020. He was born in Elkton on September 2, 1941. Mr. Slayton was a farmer, business owner and retired from the United States Air... View Obituary & Service Information

The family of Billie Wayne Slayton created this Life Tributes page to make it easy to share your memories.

Billie Wayne Slayton, age 79, passed away at his home in Elkton,...