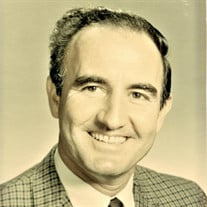 Claud Leigh Millican, born in Columbia, TN on April 23, 1928 to John Leon Millican and Rosie Green Millican passed away on May 15, 2022. He was preceded in death by his parents and siblings JL Millican, Charlene Fite, Jim Millican, Bobby Pennington, and two infants. Claud’s family moved to Pulaski, TN when he was in elementary school. He graduated from Giles Co. High School in 1947 where he was a star football player. After working at the Bennett-May Funeral home for a year, he decided to enroll in Martin Methodist College. On registration day he met Sarah Kelly from Gallatin, TN, that was the beginning of a love affair that lasted almost 69 years. Claud and Sarah were married in Gallatin, TN on July 18, 1953. Claud was a U.S. Army Veteran stationed at the Fort Jackson, SC 1953-1955 during the Korean War. He served as Master Instructor in the 3rd Army Leadership School and was honorably discharged with rank of staff Sergeant in 1955. He was always proud of his service to our country. Claud was an educator. He holds a BS and MA degree from Peabody College at Vanderbilt University and an MEE from Indiana University. Claud counseled many young students in Nashville, Columbia, SC, Corydon, IN and New Albany for over 35 years. He never met a stranger. He was a talker who loved telling stories of his growing up years in Pulaski, TN. Claud served on the former Floyd Memorial Hospital Board, now Baptist Health Floyd from 1986-1993 and served as chairman in 1989, 1990, and 1991. He began many projects and advancements that brought Floyd Memorial into the future to compete with other area hospitals. He received the Sagamore of the Wabash award from Gov. Even Bayh in 1995. He was a longtime member of Trinity United Methodist Church, American Legion Post #60 in Pulaski, TN and the National Education Association. He is survived by his loving wife of 69 years, Sarah Ann Kelly Millican, and many friends who loved him. He is also survived by nieces and nephews, Ralph Millican, John Millican, Mary Ann Lewter, John Englett, Bobby Claud Englett, Barbara Jean Meyers, Terri Pennington, Helen McGrew, Eileen Terri, and Jimmy Millican. Sarah wishes to thank the dedicated group of nurses and doctors who cared for Claud during his illness. A visitation for Claud will be held Friday, May 20, 2022 from 2:00 PM to 7:00 PM at Kraft Funeral Service, 2776 Charlestown Rd., New Albany, IN and after 11:00 AM Saturday, May 21, 2022 at Trinity United Methodist Church. Funeral service will be held Saturday, May 21, 2022 at 12:00 PM at Trinity United Methodist Church. Claud will be laid to rest with military honors in Maplewood Cemetery in Pulaski, TN on Tuesday, May 24, 2022 at 11:00 AM. Memorial contributions can be made to Trinity United Methodist Church or the New Albany/Floyd County Animal Shelter. Kraft Funeral Service of New Albany, Indiana and Bennett-May & Pierce Funeral Home of Pulaski, Tennessee are in charge of arrangements for Claud Leigh Millican. Online condolences may be left at www.kraftfs.com Or www.bennettmay.com

Claud Leigh Millican, born in Columbia, TN on April 23, 1928 to John Leon Millican and Rosie Green Millican passed away on May 15, 2022. He was preceded in death by his parents and siblings JL Millican, Charlene Fite, Jim Millican, Bobby... View Obituary & Service Information

The family of Claud Leigh Millican created this Life Tributes page to make it easy to share your memories.