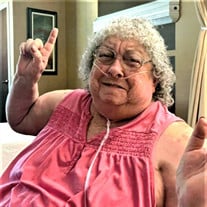 Obituary for Dorthy Susan Cantrell Dorthy “Sue” Susan Cantrell of Pulaski TN passed away peacefully on Wednesday June 1st 2022. She was born in Painesville Ohio on December 27th 1945, to her late parents, Margaret C. Grammas and Edwin R. Palo. Sue was raised in Northeastern Ohio. She lived a lot of her adult life in Crawford County PA. Sue moved to Pulaski TN in 2007. Sue was a Rehab Counselor who was dedicated to helping people stay sober. She was loved by all those who met her. She was very involved in her family and loved having her grandchildren and great grandchildren around her as much as she could. After Sue retired, she fell in love with birds. She would breed them with her daughter. She enjoyed going to bird shows and making bird toys. A private family memorial service will be held. In addition to her parents, she is preceded in death by her loving husband, Bernard G. Cantrell; son, Jay Dunken, Daughter Cheryl Geary; sister, Mary Rozhon-Palo, Brothers Ed Palo and Riley Curtis, and grandson Brandon Calkins. She was survived by her loving children; daughter, Peggy Vliek and ex-husdand Scott Vliek, Son, Robert Calkins and wife Tina Calkins, Daughter, Lori Golding and husband James Golding. Grandchildren; Keith Timme, Christopher Dunken, Heidi Timme, Jaimee Fenton, Melissa Geary, Mathew Geary, Douglas Fenton, Robert Calkins Jr., Jacob Geary and Justin Calkins; and 13 Great Grandchildren. Bennett-May & Pierce Funeral Home and Crematory are in charge of all arrangements for Dorthy “Sue” Susan Cantrell.

The family of Dorothy "Sue" Susan Cantrell created this Life Tributes page to make it easy to share your memories.