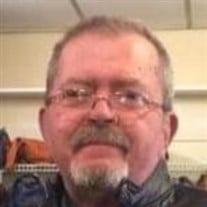 Doyle Edward “Eddie” Smith, Jr. passed away Thursday, May 20th, 2021. He was born on March 22nd, 1958 in Pulaski, TN and was 63 years old. Eddie loved to spend time with his family and church family. He was devoted to his Lord & Savior, his family, and his church family where he served as a deacon for over 40 years. He also served many years as a Sunday school teacher, song leader and musician. He was instrumental in the rebuilding of Wales Baptist Church. In his spare time, he also enjoyed going camping, fishing, motorcycles, spending time with his grandkids, and participating in tractor pulls. Visitation will be held Saturday, May 22nd, 2021 from 2:00 to 6:00pm at Bennett-May & Pierce Funeral Home and Crematory. Funeral Service will take place at 2:00 Sunday, May 23rd, 2021 at Wales Baptist Church. Burial will follow at Giles Memory Gardens. He was preceded in death by his parents, Doyle and Cleo Smith, and his father-in-law Clifford Thomas. He is survived by his wife, Shirley Thomas Smith of Pulaski, TN. Daughters, Chasity (Kevin) Wells of Pulaski & Conetha (Shane) Garner of Lawrenceburg, TN. Two Grandchildren that he adored, Malin Kate “Mae Mae” Garner, and Austin Blaze aka “Buddy” Sisters, Pam (Scott) Tarpley of Pulaski, TN and Janet Dunavant of Pulaski, TN. Brothers, Mack (Janie) Thomas of Pulaski, TN and Steve Thomas of Pulaski. TN. A mother in law that he loved: Marzee “Mee Maw” Thomas of Pulaski, TN. Step-Mother, Carolyn Smith of Pulaski, TN Brothers, Billy Joe (Teresa) Griggs of Pulaski, TN and James (Donna) Griggs of Pulaski, TN He is also survived by a multitude of nieces and nephews. Bennett-May & Pierce Funeral Home and Crematory are in charge of arrangements for Doyle Edward “Eddie” Smith, Jr.

The family of Doyle Edward Smith Jr created this Life Tributes page to make it easy to share your memories.