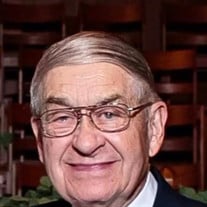 James Rand Hayes, 85, passed away on August 22 at his home in Pulaski, Tennessee due to natural causes. He was a devoted Christian, husband, father, grandfather, and great grandfather. Mr. Hayes is preceded in death by his parents, James Woodrow-Hayes and Bonnie Pollock Hayes. He is survived by his wife, Carolyn Phillips Hayes and two children, Christie (Lyman) Brown and James Rand (Christy) Hayes, II. Grandchildren include Taylor (Channing) Brown, Ryan Hayes, Hudson Hayes, and Grayson Hayes, and one great grandchild, Kathryne Brown. Other survivors include nephews, Phil (Connie) Carpenter, Mike Carpenter, and niece, Phyllis (Bob) Owens and many dear cousins. Mr. Hayes was born in Pulaski, Tennessee on August 12, 1936, and lived here his entire life. He is a graduate of Giles County High School, and then married Carolyn Phillips on August 12, 1956. He went on to serve in the Tennessee National Guard and then later was owner of Z. B. Pollock and Sons, a full auto repair business and wrecker service, for many years until selling his business in 1985. Mr. Hayes also developed Hayes Properties during this time, and leased self-storage units until 2020. He also served as an elder of First Presbyterian Church in Pulaski for many years, as well as many other positions in the church where he was a member and attended regularly for 80 years. Mr. Hayes was a devoted board member at First National Bank in Pulaski, and later served as an Emeritus Board member until the time of his death. He was an excellent wood craftsman as well, and his work is displayed in many homes and businesses throughout the community. However, Mr. Hayes never really "retired", as he continued to serve others and his community through his unsolicited generosity and giving to others. He was always available to help others in any way that he could. He will be missed by many. In lieu of flowers, memorials may be made to First Presbyterian Church, P. 0. Box 174, Pulaski, TN 38478 or Giles County Library, 122 S. Second Street, Pulaski, TN 38478. Due to Covid-19 pandemic, a private family service will be held. Bennett-May & Pierce Funeral Home and Crematory in charge of arrangements of James Rand Hayes.

James Rand Hayes, 85, passed away on August 22 at his home in Pulaski, Tennessee due to natural causes. He was a devoted Christian, husband, father, grandfather, and great grandfather. Mr. Hayes is preceded in death by his parents, James Woodrow-Hayes... View Obituary & Service Information

The family of James Rand Hayes created this Life Tributes page to make it easy to share your memories.