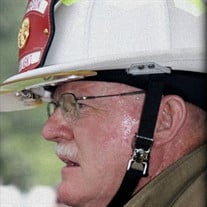 James S. Thompson of Pulaski, TN passed away on Monday October 11, 2021 at Southern Tennessee Regional in Lawrenceburg. He was born on November 18, 1946 in Pulaski, TN. and was 74 years old. Jimmy was a loving husband, father and papa. He was employed by the City of Pulaski as Fire Chief from May 26, 1994 till his retirement on Dec 31, 2011. He also served as the first Fire Chief of the Elkton Fire Dept and helped establish Elkton’s Fire Department. He continued to work part-time as a building inspector for the City of Pulaski. He was very proud to be a contributor of one of his prize wood creations to be auctioned at the annual fund raising ceremony at the Tennessee Fire Chiefs Association where he served as President and a long-time member and for The Tennessee Fire Safety Inspectors Association. He served as Director of the Tennessee State Fire School in Murfreesboro TN, and as an Instructor with the Tennessee Fire Service and Codes Enforcement Academy. He was a wood turner and a life- long friend of Blue Grass. He was veteran of the United States Army. Visitation will be Friday October 15, 2021 from 10:00am-1:00pm at Bennett-May & Pierce Funeral Home. Memorial service will follow at 1:00pm at Bennett-May & Pierce Funeral Home. Burial to follow at Maplewood Cemetery. He was preceded in death by; wife Brenda Helums Thompson. Parents, Elma Stewart Thompson and Mary Aline Pope. Brother, Charles Thompson. He is survived by his, wife, Becky Holt Thompson of Pulaski, TN Daughter, Ginger (Jesse) Witt of Elkmont, AL. Son, Jeremy Thompson and Fiancé Stephanie of Pulaski, TN. Step-children Daughter, Angel Fuller Sons, Alan (Belinda) Fuller and Stefen Fuller. Sister-n-law, Carolyn Thompson. Grandchildren, Aubrie Harwell, Sara Harwell, Jeremiah Fuller, Zachary Fuller, Dillain Fuller. 1 Great grandchild. Several nieces, nephews, cousins, and friends also survive. Bennett-May & Pierce Funeral Home and Crematory is in charge of arrangements for James S. Thompson.

James S. Thompson of Pulaski, TN passed away on Monday October 11, 2021 at Southern Tennessee Regional in Lawrenceburg. He was born on November 18, 1946 in Pulaski, TN. and was 74 years old. Jimmy was a loving husband, father and papa. He... View Obituary & Service Information

The family of James Stewart Thompson created this Life Tributes page to make it easy to share your memories.