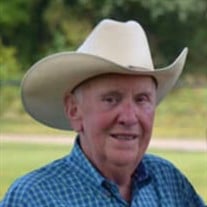 Joe Markham Warren of Lynnville, TN, passed away Thursday, July 29, 2021 in Colorado. He was born in Frankewing, TN on April 1, 1935 and was 86 years old. He was a member of the Odd Fellows Hall Church of Christ and Still Waters Cowboy Church. Joe spent his life raising cattle a person could be proud of, but the true pride of his life was his kids and grandkids. Every conversation he had would eventually turn to bragging about his family members. Joe never met a stranger, and he formed long-lasting friendships that spanned the country. He wasn’t afraid of hard work, and passed that ethic on to everyone around him. While raising cattle was a constant throughout his life, he also enjoyed 25 years in real estate, and was well respected in the show cattle world. He instilled that love of showing cattle in his kids and grandkids, cheering them on from the sidelines even up to the week preceding his passing. Joe’s faith, sense of humor, and generosity left a lasting impression on everyone lucky enough to know him. Visitation will be held on Friday, August 6, 2021 from 11:00 until 2:00pm. Funeral services to follow at 2:00pm in the chapel of Bennett-May & Pierce Funeral Home. The burial will follow in Giles Memory Gardens. In lieu of flowers donations may be made to Odd Fellows Hall Scholarship fund, Still Waters Cowboy Church or to Vanderbilt Children’s Hospital. He was preceded in death by his parents, James William Warren and Katie Pearl Foster Warren and brothers, James Warren and Perry Warren. He is survived by his, wife of 40 years, Susan Elizabeth Hunt Warren of Lynnville, TN. Daughter, Pam (John) Dickey of Pulaski, TN Daughter, Jackie (Jonathan) Perry of Fayetteville, TN Son, Jeff (Penny) Warren of Pulaski, TN. Daughter, Elizabeth (Bo) Jackson of Belfast, TN. Son, Mark (Nikki) Warren of Lynnville, TN Grandchildren, Ryan (Crystal) Southerland, Reid (Nicole) Southerland, Zach (Bonnie) Bailey, Alli Perry, Amy (Kenneth) Bass, Lee (Emily) Warren, Tucker Jackson, and Piper Jackson. 8 Great grandchildren Several nieces and nephews also survive. Bennett-May & Pierce Funeral Home is in charge of arrangements for Joe Markham Warren.

Joe Markham Warren of Lynnville, TN, passed away Thursday, July 29, 2021 in Colorado. He was born in Frankewing, TN on April 1, 1935 and was 86 years old. He was a member of the Odd Fellows Hall Church of Christ and Still Waters Cowboy Church. Joe... View Obituary & Service Information

The family of Joe Markham Warren created this Life Tributes page to make it easy to share your memories.