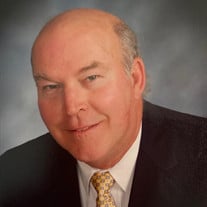 Pulaski business owner, husband, father, and brother, John Erskine Sharp Murrey passed away on Monday afternoon with his family by his side after an extended illness. He went to join his parents, Bill and Sara Frances Murrey, and his beloved papillon Vito. He will be terribly missed by his wife of 31 years, Beverly Murrey; daughters, Rachel (Joe) Weatherly, Lyndsey (Randy) Howell, and Sara Katherine (Cain) Murrey Pierce; brothers, Preston (Patsy) Murrey, and Ed Murrey (daughter Halle); brother-in-law Charles (Cassie) Greene and sisters-in-law Kay Wells and Kathy (Roy) Young; as well as his uncles Nat Murrey and Corky Wakefield, and a host of nieces, nephews, and cousins. Visitation with the family will be held Wednesday, April 27, from 4-8pm at Bennett-May and Pierce Funeral Home. A second visitation will be held Thursday, April 28, at First United Methodist Church of Pulaski from 3-5pm, followed by a celebration of John’s life at 5pm. Born June 3, 1954, John grew up in Giles County amidst the large, but close, Murrey and Sharp families. He was particularly close to his brothers, Preston and Ed, even though Preston and John had asked for a horse instead of a little brother. The Webb School in Bell Buckle, TN, became a second home for John. He made lifelong friendships among the class of 1972, many of whom gathered each year to duck hunt throughout his life, and remained an engaged alumni. John briefly attended college before joining the family business at Sharp Motor Company in 1974 in Pulaski, the beginning of a lifelong career in the automobile business. On May 8, 1987, John and his brother Ed established Murrey Chevrolet. He was a member for the Tennessee Automotive Association (TAA), serving as Secretary-Treasurer in 2000 and then, following in his grandfather’s footsteps 50 years later, became President in 2001. TAA named John the 2011 Dealer of the Year with their Andrew Jackson Award, and he was named Time Magazine Dealer of the Year for Tennessee in 2012. He continued to serve on the Tennessee Motor Vehicle Commission, TAASIT Board of Trustees, and TAASC Board of Directors until his death. John led a life of service to his church and his community. He was a lifelong member of the First United Methodist Church of Pulaski, serving in several capacities. He especially looked forward to helping with events like the ham supper and fish fry. He was a leader for the Friends of New Canaan Ranch, former president of the Chamber of Commerce, and a dedicated member of the Exchange Club, having served as president and receiving the Exchangite of the Year Award. Family was always John’s north star. In spring of 1980, he knocked on Beverly’s door, the woman he said was the most beautiful he’d ever seen, to take her on a date. As she answered, her 3 and 5-year-old daughters tumbled into the room on top of each other, both trying to see him first. From that day on, John took care of Beverly, Rachel, and Lyndsey as if they were his own. He and Beverly traveled for NADA and TAA conferences and took care of each other through thick and thin. In August of 1991, Sara Katherine set the whole family lovestruck with her arrival. John took being a girl-dad all in stride. He introduced them to movies and music, two of his loves, from old, black and white war movies to the latest James Bond film, and from classical music to classic vinyl. There was even an unfortunate Yanni stage; they weren’t all winners. From meeting boyfriends to arguments about who used his razor, to father-daughter dances, to walking them down the aisle, John showed his girls the kind of love they should come to expect from their husbands. His girls loved animals, and like many dads, he might start out grumping about a new addition, but would always become as attached as any of the family. Through the years, John loved and cared for a menagerie of dogs, cats, fish, guinea pigs, and even a raccoon. He jumped in the river more than once to pull out one of those dogs. Sara Katherine introduced him to the papillon breed with Vito, and Vino is the latest installment. He was a proud puppy grandpa to Mae Mae, Tilly, Stahl, Henry, Vinnie, Chopper, Jack, Mia, Cooper, Buxley, and Charlie. Honor, service, and sacrifice come to mind when thinking of John’s life, contributions, and accomplishments. He was respected and admired as a gentleman. He was a man of great faith and knew all happens according to God’s plan, and while he accepted his time was near, he fought for every moment with his family. Beverly stayed right by his side, and he loved having all of his girls home. Of course, there are tears and grief, but when John left this world there was an outpouring of love above all for a good man and a life well lived. The family would like to extend special thanks to John’s cousin Hallie Bensinger, caregivers Chelsey Cardin and Robert Myles, and Compassus Hospice for their dedicated support during John’s illness. For those wishing to honor John, in lieu of flowers, donations may be made in his name to First United Methodist Church of Pulaski, The Webb School (319 Webb Road East, Bell Buckle, TN 37020), the Giles County Humane Society, or the Giles County Public Library. Bennett-May & Pierce Funeral Home and Crematory is in charge of the arrangements for John Erskine Sharp Murrey.

Pulaski business owner, husband, father, and brother, John Erskine Sharp Murrey passed away on Monday afternoon with his family by his side after an extended illness. He went to join his parents, Bill and Sara Frances Murrey, and his beloved... View Obituary & Service Information

The family of John Erskine Sharp Murrey created this Life Tributes page to make it easy to share your memories.