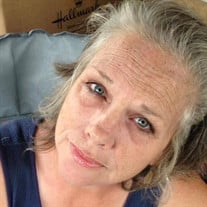 “The wonderful life (on earth) of Marcy Lynn Turner” 2 Corinthians 5:8 “We are confident, yes, well pleased, rather to be absent from the body and be present with the Lord” Marcy “Booma” was born March-15-1960 in Saginaw Michigan. She was preceded in death by her mother Ruby Jones and father Melvin Turner as well as her second father Doyle Jones. Marcy was survived by her beautiful and only child (daughter) Melissa Newman “Missa chickabee”. Followed by her 3 amazing grandchildren Noah Barrett, Alyson Barrett, Brennon Newman. Her surviving siblings are Dave Turner wife Sue, Larry Turner wife Susan, Tim Turner wife Melody, Suzanne Antoine, Penny Noon husband Scott. Nieces and nephews Kimberly, Pete, Carrie, Ken, Abigail, Sam, Stephanie, Timothy, Tobin, Tiffani, Chris, Nick, Josh, Beka, Tressey, Joey, Katreena, Merideth. Growing up Marcy graduated from Evangel Temple at the age of 18. She then went to college at Christ for the Nations. Following college She started traveling with a group called Signs of Love and a group called Proclamation where she performed Christian music to the deaf. Employment Her first career was at Mid Continent Concrete followed by Mortgage Clearing House, for a time of about 6 years. Her final career was at Baptist Village where she loved more than anything the people. Values Her main goal in life was to serve her family and the Lord! Favorite Past time and fun Her main past time was to be there for her grandchildren’s every move. She was there for both the birth of Noah and Alyson. As a matter of fact she was worried that she wouldn’t bond with Brennon due to the fact she was in another state for the first few years and could not be there as much, but that didn’t end up being an issue at all. She loved all 3 of her grand children more than life it self. Even as Booma battled and overcome cancer she maintained time with them. Closing Marcy dearly loved all of her family and friends. She kept those that knew her dear to her heart. There was never a lack of tenderness, comedy, or love from her. We know that she would not want this to be GOODBYE but rather “ See You later”! There is no doubt in our hearts that she is sitting with her Lord and savior JESUS CHRIST as well her beloved parents at this current time. She will be dearly missed but soon met again. Form the word of God John 11: 25-26 “Jesus said to her, “ I am the resurrection and the life”. Whoever believes in Me, though he die, yet so he live, and everyone who lives and believes in Me shall never die. Do you believe this?”

The family of Marcy Lynn Turner created this Life Tributes page to make it easy to share your memories.

“The wonderful life (on earth) of Marcy Lynn Turner”
2 Corinthians...