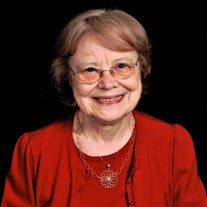 Margaret entered into eternal rest in Heaven on November 4, 2021. Born on June 3, 1930 in Giles County, Tennessee to the late Ester Mae Henson and Reece Campbell Long. She is predeceased by her loving husband of 69 years, Rev. Horace C. Bass, her sisters Nell Franks, Jewel May, her brothers Marvin Long and John Long, brothers-in-law Mitchel Garner, Billy Gowan, and sister-in-law Freddye Long. She is survived by her children, Edward E. Bass (Joan), Betsy Bass Miller (Bob), Linda Bass Wolf (Ron), and Mary Elizabeth Harper (Matt); grandchildren Dave Bass (Jenna), Melanie Cundiff (Bob), Joe Bass (Justine), Heather Wolf, Matthew Harper Jr, Elizabeth Harper, and Ryan Harper; great-grandchildren, Jack, Julia, and Olivia Bass. She is also survived by her sisters Esterlene Green (Robert), Mary Garner, Fay Gowan, and Joy Sulcer (Pat). Margaret and Horace were blessed with large families having many sisters, brothers, in-laws, cousins, nieces, and nephews, that she loved. Margaret was an honor graduate of Giles County High School class of 1949. She was outstanding in Home Economics and was awarded a trip to the National 4-H Convention in Chicago after winning the Tennessee Clothing Achievement Award. She was a talented clothing designer. As a teenager she created clothes for her sisters and others. Upon graduation from high school and marrying Horace, she accompanied him to Norfolk, VA, until his discharge from the U.S. Navy. They then settled in Pulaski, TN, where she started a business as a seamstress fashioning fine clothes including evening dresses and wedding attire, In September 1960, Margaret & Horace answered the call to the Methodist ministry. They were assigned to the Ardmore United Methodist Church where they served for five years while Horace attended college. She was very active in the Children’s Ministry where she organized a Girl Scouts program and a Children’s Day program. In 1965, they were assigned to Antioch United Methodist Church where they served for five years and supported Horace while earning his masters in Divinity at Vanderbilt University. While at Ardmore and Antioch, she served as a substitute teacher in local schools. Margaret was also an award-winning amateur photographer and spent many years practicing her craft. Horace and Margaret’s marriage was a true love story and partnership throughout their lives, from their ministry, to raising their family, to running Capitol City “Fluffo” Mattress. She was a very kind, loving person, and a wonderful mother, sister and friend. She and her “farmer’s daughter” cooking, will be missed. The family would like to thank the staff of The Village at Bellevue for their loving care over the last five years and for Caris Hospice. In lieu of flowers, contributions can be made to the Margaret & Horace Bass Scholarship Fund at the University of Tennessee Southern in Pulaski, Miriam’s Promise, or Belle Meade United Methodist Church. Graveside services will be held at Maplewood Cemetery in Pulaski on Saturday, November 6, 2021 at 1:00. The family kindly requests that all attendants wear a mask. Bennett-May & Pierce Funeral Home is in charge of arrangements for Margaret Long Bass.

Margaret entered into eternal rest in Heaven on November 4, 2021. Born on June 3, 1930 in Giles County, Tennessee to the late Ester Mae Henson and Reece Campbell Long. She is predeceased by her loving husband of 69 years, Rev. Horace C. Bass,... View Obituary & Service Information

The family of Margaret Long Bass created this Life Tributes page to make it easy to share your memories.

Margaret entered into eternal rest in Heaven on November 4, 2021....