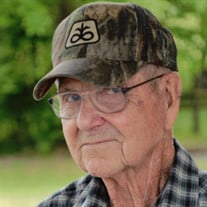 Richard Eugene Long, Sr., beloved husband and “Grandaddy”, passed away surrounded by family on Sunday, April 10, 2022, in his home. He was 92 years old. A graduate of Bodenham High School, Gene served in the United States Air Force as a Teletype Operator. After being honorably discharged, he retired at Murray Ohio after thirty-four years of dedicated service. He was President of Farmer’s Mutual Insurance Company, and also served on the Giles County Equalization Board. He was a long-time deacon at Wales Baptist Church. Grandaddy could be found in his beaten-up light blue Chevy Silverado roaming Hams Creek, usually with a deer in the bed of the truck and his grandkids alongside him. He was a true lover of God’s creation, and he instilled a love for farm life within his children and grandchildren. Every spring, when his tulips bloomed, you’d see his face light up a little more than usual. He was stubborn as a mule and determined as one could be. Nobody was going to tell Gene Long he couldn’t do something, because he was certain to prove them wrong. He was a hard-worker, an avid storyteller, a skilled BB gun Coca-Cola can shooter, a professional tree identifier, a ginseng adventurer, a prankster and the best all-around Grandaddy one could ask for. If you knew him, you’d often hear him preach about Christ’s perfect love for sinners like us. He’d often follow it all up with his famous “I’m no example.” This is where he got it wrong. Grandaddy was the example— We will carry that love and those memories with us in all of the days to come. Visitation will be held Tuesday, April 12th from 4:00 to 8:00pm at Bennett-May & Pierce Funeral Home The Funeral Service will be Wednesday, April 13th at 11:00am in the chapel of Bennett-May & Pierce Funeral Home. The Burial will take place at Giles Memory Gardens. He is preceded in death by his wife, Joan Long, Parents, Levi and Lerah Long, Brothers, Buford Ray Long, Royce C. Long, and Robert Edwin Long, Grandson Daniel Eli Collins. He is survived by his three children, Daughter, Beverly (Danny) Collins of Pulaski Daughter, Patricia (Wayne) McDougal of Pulaski Son, Richard Long, Jr. of Pulaski Sister, Sarah Long of Conyers, Georgia Grandchildren, Stephanie Collins, Kim (John) Miller, Valerie (Patrick) Wilcher, Ashley (Bo) McDougal - Ingram, Laklin (Nick) Long Messer, Saxton (Elizabeth) Long, and Drey Long. Great Grandchildren, Grayson Miller, Gibson Miller, Lerah Wilcher, and Owen Messer Bennett-May & Pierce Funeral Home and Crematory is in charge of the arrangements for Richard Eugene Long, Sr.

The family of Richard Eugene Long Sr. created this Life Tributes page to make it easy to share your memories.