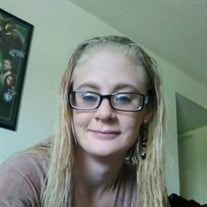 Sabrina Gail-Renee Bean passed away on October 8, 2021 at Vanderbilt University Medical Center. She was born on May 1, 1996 in Pulaski, TN and was 25 years old. Sabrina loved taking care of her boys, doing crafts with them. A Lover of animals.... View Obituary & Service Information

The family of Sabrina Gail Renee Bean created this Life Tributes page to make it easy to share your memories.

Sabrina Gail-Renee Bean passed away on October 8, 2021 at Vanderbilt...