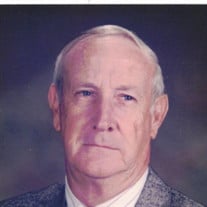 William Earl (Billy) Mayfield, was the fourth son of Sallie Will Maultsby Mayfield and William Thomas Mayfield. He was born on March 23,1937, in the Goodsprings community of Giles County. Billy was predeceased by his parents, his brothers Tom Mayfield and twins, Joe and Jim Mayfield, sister-in-laws Gertrude Kellum Mayfield and Edith Walls Mayfield, father-in-law and mother-in-law, Ernest and Birdie Harwell Williamson. His school years began at Shorts School and lasted the sum of two weeks. From there, he attended school in Pulaski. The class of 1955 was one to remember. They formed lifetime friendships and stayed close their entire lives. Billy was very involved in athletics from an early age, shooting into a homemade hoop in the yard, to running relay at Field Day, playing football and basketball for the Giles County Bobcats. His love for baseball took him to dusty fields every weekend, where he would sometimes pitch three straight games. His shoulder finally succumbed to the strain. His peers would say had he known how to rest that arm, he could be wintering in Florida. Upon graduation from GCHS, Billy obtained a scholarship to play basketball at Martin College under Coach Kermit Smith. Many tales come from these days. After two years at Martin, he decided to become a Forest Ranger and get married. He had met the love of his life, Judy Williamson, at Coolsprings Church of Christ, two years prior. After taking a trip to East Tennessee to view the cabin, firetower, and the fish hatchery, he made a decision that would guide him into 46 years of coaching—he always made the statement —“there was never a day I didn’t want to go to work.” So, wedding plans were delayed until he could finish his college career at Middle Tennessee State University, where he obtained his Plus 45 degree. On August 6,1960, a wedding took place, then graduation and a new job at Marshall County High School, as assistant football coach and science teacher. Later, he would become head football coach and boys basketball coach at Cornersville High School, and finally, to his alma mater, Giles County High School as assistant football coach and head girl’s basketball coach. He agreed to the girl’s position for one year but this turned into 38 years, which included many banners, state championships, runners-up, highly successful Camp of Winners basketball camps, assisted in coaching at his friend, Pat Summit’s Camp and coached the East/West All-Stars, where current Lady Vol coach Kelly Jolly-Harper was a player. Billy received many local, district, regional and state awards, 2 TSSAA State Championships – 1980-81 & 1981 -82, 5 TSSAA Final Four appearances, and 1 TSSAA Class AA State Runner-Up – 2001-2002. He received District Coach of the Year honors 5 times (1980-81, 1981-82, 1989-90, 1992-93, 2001-02), and Tennessee Athletic Coaches Administration (TACA) Coach of the Year 3 times (1985, 1990, and 1993). He was inducted into the Martin College Hall of Fame in 2000 and the TSSAA Hall of Fame in 2003, named “Book of Golden Deeds Award” by a local club and the GCHS gymnasium bears his name alongside his beloved friend, Joe Hardin. Upon retirement Coach Mayfield won a total of 750 games. Billy coached many young ladies, several of whom went on to receive college scholarships and played professionally. Billy also taught hundreds of students as the Driver’s Education instructor at GCHS. Upon retirement, his other love was raising registered Black Angus cattle and watching his grandchildren in the show ring. His children started this some fifty plus years before. His legacy was — a Christian and member of the Church of Christ, loving husband, a doting father and grandfather, a wonderful, successful coach, teacher and friend. Billy was also a member of the National Guard and served for 7 years. Billy is survived by his wife Judy, of 61 years, having been together 66 years, his son James Michael (Mike) Mayfield and wife Susan Marsh Mayfield, of Pulaski, his daughter Mariana Mayfield Hamilton and husband, Eric, of Knoxville, Tennessee, his adored five grandchildren Will Mayfield and Ben Mayfield, of Pulaski, Meredith Mayfield, of Knoxville, Sarah Hamilton of Atlanta and Jack Hamilton of Knoxville, and his nephew Paul Douglas Mayfield of Nashville. Billy is also survived by a host of former players, students, friends, cousins, and neighbors. The family would like to thank the many devoted care givers and hospice nurses who lovingly cared for us all. Their kindness is deeply appreciated. In lieu of flowers, donations may be made to GCHS girl’s basketball or GCHS football programs or the charity of your choice. The visitation will be from 11:00 am until 2:00 pm Thursday, August 26,2021, at Bennett-May & Pierce Funeral Home. The funeral will follow at 2:00pm in the chapel of Bennett-May & Pierce Funeral Home, burial will follow in Giles Memory Gardens. Bennett-May & Pierce in charge of the arrangements for William Earl (Billy) Mayfield.

William Earl (Billy) Mayfield, was the fourth son of Sallie Will Maultsby Mayfield and William Thomas Mayfield. He was born on March 23,1937, in the Goodsprings community of Giles County. Billy was predeceased by his parents, his brothers... View Obituary & Service Information

The family of William Earl "Billy" Mayfield created this Life Tributes page to make it easy to share your memories.

William Earl (Billy) Mayfield, was the fourth son of Sallie Will...